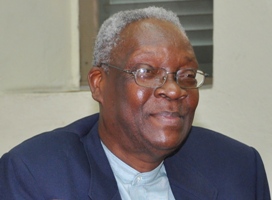 Sir Llyod Erskine Sandiford joins his son Garth Sandiford on the Chattin In Manhattan Show for a chat about his life and successes at his home in Barbados West Indies.

Sir Lloyd Erskine Sandiford (1937 – ) was the 4th Prime Minister of Barbados. Born on March 24 1937, Sandiford was a politician, scholar and educator, author and diplomat.

Sandiford was educated at Coleridge and Parry School. Like Adams and Barrow before 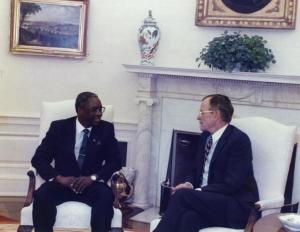 him, young Sandiford continued his studies at Harrison College. He went on to complete a Bachelor of Arts in English from the University of the West Indies in Jamaica where he served as President of the Guild (1954). He then pursued a Master’s degree in Economics and Social Studies at the University of Manchester in Britain.

Upon returning to his home country of Barbados, Sandiford joined the Democratic Labour Party (DLP) and was appointed to the Senate in 1967 shortly after the country gained Independence (1966). 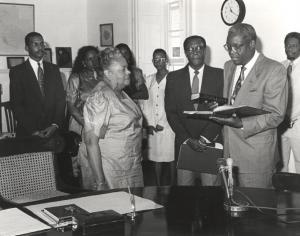 Swearing in of Erskine Sandiford as Prime Minister 1987

Sandiford left the Senate to pursue a seat in the House of Assembly which he won during the 1971 elections.

Within the Government of Barbados, Sandiford held many posts including: 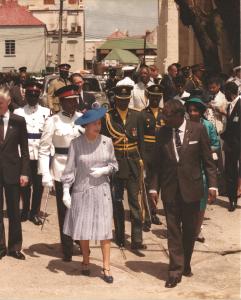 With a vision towards the future and self-effacing character, Erskine Sandiford was committed to his country and a true leader of his people.

Sandiford remained in Parliament until 1999 after which he lectured economics and Caribbean politics at the Barbados Community College. In 2000, Sandiford was credited with the highest national honor when he was granted the rank and title of Knight of St. Andrew.

In 2009, Sir Lloyd Erskine Sandiford received an honourary LLD at UWI’s Cave Hill Campus. The same year, he became Ambassador to China. Sandiford is the first Barbadian Prime Minister to be appointed Ambassador to a foreign country. 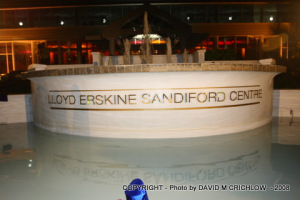